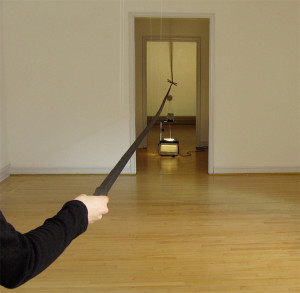 A 14 m long arrow reaches through the space and points besides a projected dot
at the end of a room.  The arrow is made of thin wood and feels plastic like a
rubber arm. The image of the dot is caused by a overhead projector that
stands under the arrow a few meters from the wall. A small marble hangs from
the arrow down to the projection area.  If the spectator moves the arrow slightly,
the projected dot will move strongly. The work has two scales at the same time.